*** At my current job there is a communal breakroom fridge where people abandon all manner of food to fester and rot. My department is tasked with cleaning out the breakroom on Fridays , and so to clear out the dead weight I instituted the now-infamous Friday Breakroom Fridge Emails. Everybody said I should share them, so here they are***

Once again it’s time for the weekly Use-it or lose-it James Brown ‘funky’ food nominations!  Only the funkiest of foods make the cut. If you recognize one of these items and aren’t ready to part with it, you have until the end of the day to save them from total annihilation!

It’s Deja-food for our nominees this week, as they have been hiding out for a while and have escaped being nominated in weeks past by looking very generic and hiding under even older, funkier foods. Our nominees for this week:

1.        Everybody knows that the bird is the word, but the bird also appears to be the contents of the science experiment in this first Tupperware, which is conveniently divided into two sections so you don’t have to worry about your moldy bean-paste accidentally touching your slimy, fermented chicken leg. We just couldn’t have that, now could we?

2.       When the moon hits your eye like a bigga pizza pie, that’s amore.  But when the smell hits your nose like a sewage fire hose, it just might be the artist formerly known as pasta that’s lurking in this second container.   Open at your own risk. Free ripped plastic bag also included. 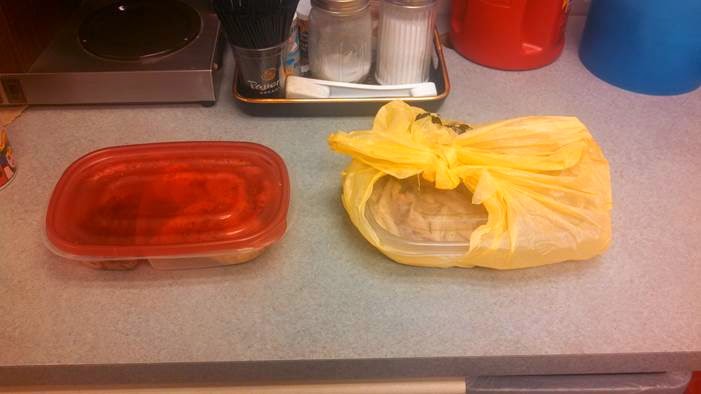 If you want to save these foods or their Tupperware, snag them by the end of the day or they will be interned in the earth.

Have a fun weekend everybody!