Breaking News: Arnold Schwarzenegger probably won't take his shirt off in his next movie

LOS ANGELES (Hollywood Reporter) - Arnold Schwarzenegger has zeroed in on the film that will mark his return to the big screen: "Cry Macho," a drama about a down-on-his-luck horse trainer who is hired to kidnap a 9-year-old boy.

Filming is set to begin in September. Brad Furman ("The Lincoln Lawyer") will direct. Producer Al Ruddy, an Oscar winner for both "The Godfather" and "Million Dollar Baby," has been nurturing the project for years.

"I guarantee that you'll get another look at Arnold Schwarzenegger in this movie," Ruddy said. "Arnold always plays these big muscular guys, but there's a sweetness to Arnold in real life, and we want to bring that sweetness to the screen. "

I think what he meant to say is,

"Arnold is getting really old, and nobody wants to see his hairy bitch-tits. So instead we have to leave his shirt on and are forced to use an arcane film-making technique known as a 'story'" 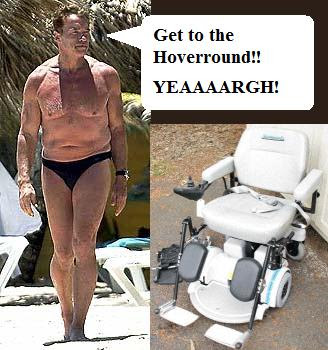